In Luganville, the Volley4Change staff have been working tirelessly in support of the recovery effort after Tropical Cyclone Harold swept through the northern islands of Vanuatu in early April, leaving behind a trail of destruction.

Rated as a Category 5 cyclone, Harold’s impact was significant, devastating communities on seven of the 83 Vanuatu islands, with Espiritu Santo and Pentecost particularly hard hit.

Working out of a small temporary office set-up at the Asia Motel in Luganville, the team have joined with Green and associate Joanne Austin, taking on the task of sorting and distributing food, clothes and assorted goods to many of the effected communities in and around the town and in South Santo.

Not unaffected themselves, former national beach volleyball player and now development coach Joyce Joshua, Sport for Development officer and para-athlete coach Stanley Toa and development officer Eunice Philemon are three of the V4C staff who also felt the brunt of Harold, losing rooms and roofs off homes and gardens destroyed but have put that aside to assist in the recovery efforts.

Normally at this time, the V4C staff would be working with pikinini for the weekly After School program, visiting communities to deliver the Volley4Change development program and running Sitting Volleyball sessions with the disability community.

But with over 159,000 people affected by the cyclone, the recovery path will be a long one with damage to buildings (houses and schools), crops, power supplies and the much-needed telecommunications infrastructure. 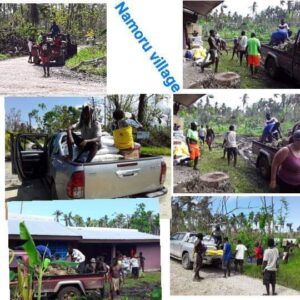 They deliver supplies which have been donated such as tarps, tents, bags of rice, salt, flour, sugar, buckets of biscuits, boxes of soap powder, mosquito coil, matches, toilet paper, nails. Sometimes the villages send their own vehicles to help with the loads with BHIV paying for the required fuel for everyone.

As they sort through the donations, recording the details and loading the vehicles to deliver the supplies to the communities, Joyce Joshua says they are starting to hear stories emerge.

“We are hearing and writing down stories from some of the people in different communities on how TC Harold has impacted their homes and their communities. We try to offer encouragement and comfort to them.” 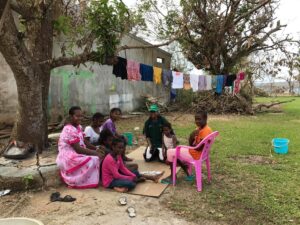 “We’ve supported the communities with supplies and are very happy and thankful to the Big Heart Island Vanuatu charity group for enabling this support for the communities’ needs since the cyclone damaged their homes and left them feeling hopeless.” 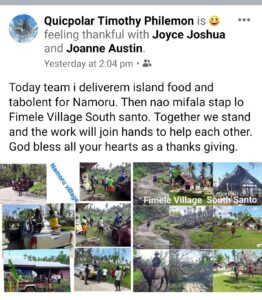 It will be a long road to recovery, a feat which is no stranger to this Pacific island nation, but which nevertheless underscores their resilience and highlights the positive aspects of a culture where the family of community always comes first.

* Volley4Change – a sport for development program which is delivered through a partnership between VVF and Volleyball Australia, supported by the Australian Government through the Pacific Sports Partnerships initiative – will restart its normal schedule when this work is done. The V4C program has at its core the objective of working for and with the communities of Vanuatu for the development and growth of those communities.