What a fortnight for Team Vanuatu players competing on the Australian National Tour.

Our senior team was consistent with Linline Matauatu returning to the international courts, while our young talent learnt and shone.

As part of the wider Vanuatu squad, teenagers Majabelle Lawac and Chantale Willie went to Australia for some international experience and to learn under their senior teammates and the national coach, Michel Bargmann.

A week ago they finished a creditable 11th in the U21 Australian Championships. That experience obviously paid off as, participating in Division 2 of the Australian National Championships, they went all the way to the final on Sunday.

Defeated in two sets at the hands of Australian pair Chantal Tung and Caitlin Cockburn, Bella and Chantale came away with the Runners Up Silver medal and two bigger smiles were hard to find on Manly beach.

Bargmann was very happy with the overall team performances and especially pleased for the young members of the squad.

“It was a perfect tournament for the juniors this weekend with lots of close matches”he said.

“Their transformation from junior to senior volleyball definitely came about in Manly.”

Sherysyn Toko and Linline Matauatu paired up over the past fortnight for the Australian Tour events in Sydney – keeping the engine firing for Tini and easing Lin back into familiar territory on international sand.

Consistency underlined their story, finishing fifth in both the NSW Open and the Australian Championships finding the hurdle of the quarter finals each weekend just a little too big.

Bargmann however was still pleased with what he saw.

“We’ve had good weeks in Manly, training on a high level with different training partners,” he said.

“Both teams improved a lot and it was a nice comeback for Lin.”

Team Vanuatu is a close-knit unit and that means family and hometown support is never far away for these women. Lin’s six-month-old son Fredly was even there for all the action under the watchful eye of VVF President and Team Manager Debbie Masauvakalo.

The squad returns home to Port Vila on Monday for less than a week to recharge the batteries before heading to New Zealand on Friday. 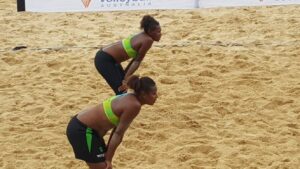 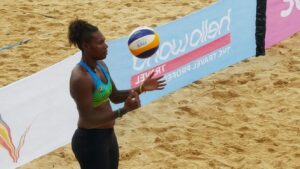 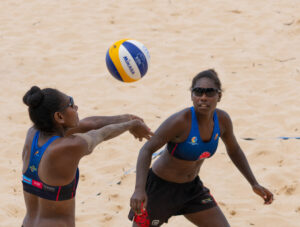 Thank you to all who supplied photos for our Online and Social posts from the fortnight in Manly, Australia.