With combinations to the fore, the Vanuatu National Women’s Beach Volleyball coach was last weekend able to mix things up bit, getting experienced talent back onto the court and giving the next generation a chance to test their mettle against strong Aussie counterparts. 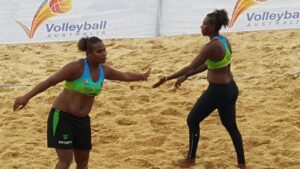 While Miller Pata and Loti Joe returned to Vanuatu for some quality family time after a few weeks on the road, teammate Linline Matauatu returned to competitive international Beach Volleyball pairing with Sherysyn Toko in the NSW Open at Manly Beach in Sydney.

It was the first big hit-out for Matauatu since the birth of her second child just six months ago. And she showed she has lost none of her competitive edge, finishing Day One without a loss.

Unfortunately, things got a bit tougher at the business end of the tournament in the quarter finals where Matauatu and Toko were defeated by the Australian pair of Mokrohajska and Michalovicova in two tight sets finishing 5th overall. But a good return for the Commonwealth Games bronze medalist nonetheless.

It was also an excellent preparation for the upcoming weekend when, with Toko, Matauatu will again head out onto the famous beach courts at Manly and take on local Aussie talent in the Australian National Championships. 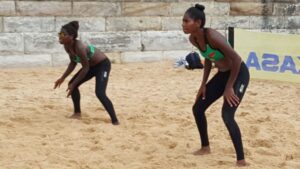 For the younger members of the squad – 18 year-old Majabelle Lawac and 16 year-old Chantale Willie – experience gained was the objective and the outcome as the Vanuatu young guns competed in the Australian Under 21 Championships, also on the sand at Manly.

While not winning any of their Pool matches, the contests were hard fought and valuable lessons were learned. A win in their final match of the weekend placed them in 11th position overall, but that invaluable experience will lay the foundations of a bright future for these two youngsters and a very positive and promising outlook for the continued growth and success of Women’s Beach Volleyball in Vanuatu. 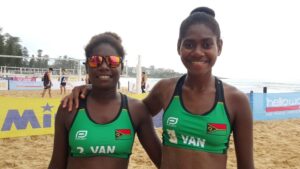 Now, there will be no time to catch their collective breath with coach Michel Bargmann putting the whole squad through its paces, training on the beach and in the gym (huge thanks to J-Train Athletic Performance in Brookvale) as they remain in Sydney to compete in the Australian National Championships this weekend (Feb 28-Mar 1).